Van
The Van is a traffic van featured in some driving games made by Xform.

The Ford Van is based on the 1994 Ford Econoline. 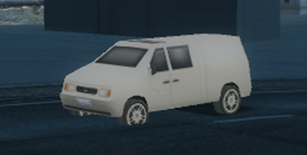