The Redeemer is a special weapon featured only in Burnin' Rubber 5.

This weapon looks similar to the DFA.

The Redeemer costs one million dollars, making it the most expensive weapon in this game.

The Redeemer launches a big missile, which can be controlled by the player. The player can choose which direction the missile has to go to. The missile makes much damage.

This special weapon is also attached to the Scud, which is called the Mobile Redeemer.

In the "Operation Sandstorm" boss battle, the Scud automatically aims the player. 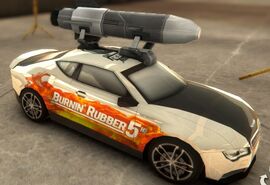